Suppose your spouse suddenly died and left you with a multitude of tough financial decisions. One crucial choice would be what to do with the funds in your spouse’s 401(k) plans and IRAs. There are several alternatives to consider, once you’ve had time to collect your thoughts and you feel emotionally prepared to proceed.


One possibility would be to roll the assets in those accounts into your own retirement plans. That’s usually permitted, as long as you meet a few requirements, and it would allow the investments from the spouse’s plans to continue to grow and compound tax-deferred until you were ready to make withdrawals. 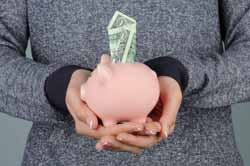 Under the rules for required minimum distributions, or RMDs, you must begin withdrawals after age 70½ (except for qualified plans if you're still working). For inherited accounts, surviving spouses can use their own life expectancy in calculating the RMDs. If you’re younger than your spouse, that will result in smaller required withdrawals—and lower taxes—than if the distributions had been based on the spouse’s life expectancy.


A third alternative is to use the money in the deceased spouse’s 401(k)s and IRAs to fund a “bypass trust” (also known as an AB trust). You could do that if a provision in the deceased spouse’s will had established such a trust, or you could “disclaim” the assets that you would otherwise inherit and have the funds go into the trust. You wouldn’t owe any income tax on that money until withdrawals begin. In this situation, RMDs are calculated over the life expectancy of the surviving spouse. However, once the retirement accounts become part of the trust, a surviving spouse can’t designate the beneficiaries to receive the funds after that spouse’s death.


Finally, of course, you could simply take a distribution of all of the assets in your late spouse’s retirement accounts. But that’s much less desirable from an income tax standpoint. The money from the 401(k)s and IRAs will be taxed at your ordinary income rates in the year you receive the funds. And if the accounts have substantial assets, you’ll likely pay tax on a substantial portion of them at the top individual rate of 39.6%.

Choosing among these options and related strategies can be complicated. We can work with you and your tax advisor to help you make decisions that make sense in your situation.