How To Bridge A Retirement Shortfall

Suppose you’ve scrimped and saved for retirement but you still haven’t met your goals. Or perhaps an illness or a business venture that went south has exhausted your discretionary funds. Or maybe you just didn’t count on costs rising so quickly. In any event, you’re standing on the precipice of retirement, but you don’t think you’ll have enough to live comfortably for the next 20 or 30 years. These four practical suggestions might help:


1. Relocate to a less expensive home. According to the Social Security Administration, housing is the largest component of living expenses for people over age 55, accounting for 35% of the cost pie. One of the best ways to save money during retirement may be to downsize your home. Do you really need that rambling four-bedroom colonial in which you raised your kids? You probably do not.

And it’s not just size that matters. You might consider moving to a location where the climate is agreeable and the costs are lower than what you’re currently paying. Just don’t forget to factor in state income taxes and other taxes. For the adventurous, a move out of the country could be an option. 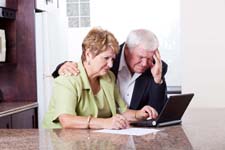 Here’s another thing to add to the equation if you’re considering relocation—it’s usually less expensive for people to live together than alone. A recent study by the Pew Research Center, based on 2011 Census Bureau data, reveals that the number of Americans living in multi-generational family households increased 4.9 million from 2007 to 2009. You could move in with your children, pay your share of the housing costs, and still come out ahead.


2. Refinance your mortgage. With interest rates at historic lows, now’s a good time to refinance an existing mortgage if you don’t plan on moving anytime soon. If you can cut your monthly bill by hundreds of dollars or more, it won’t take too long to recoup the refinancing costs.

3. Figure out your bottom line. Budgeting isn’t exciting, but making realistic projections of your likely expenses in retirement can be crucial. Frequently, costs for life insurance and spending on children will disappear as you move closer to traditional retirement age, only to be replaced by travel expenses or other new costs.

4. Go to work part-time. Being "retired" doesn’t mean you have to quit working completely. The job market for seniors has been improving, with the Bureau of Labor Statistics showing a 5.1% unemployment rate for those 55 and older in August 2015, the lowest rate in seven years. Getting a paycheck, even a relatively small one, can remove some of the pressure and supplement your income from investments, Social Security, and distributions from retirement plans.

Finally, take stock of your situation while you’re still employed full-time. Planning ahead is the best solution for bridging a potential retirement shortfall.